You don’t have to remember 2000. But, you should remember three weeks ago. That’s when we pointed out a rare event that could possibly signal the END of this remarkable, stock market rally.

Actually, it was the folks over at Sentimenttrader.com that pointed out the event. We merely speculated on what might happen next based on what happened in 2000.

On March 7, 2000, the NASDAQ 100 (NDX) rallied more than 2% intraday, then reversed to close down more than 1%. That was the only time – ever – that had happened. Three weeks later, the bubble burst and stocks started to cascade lower.

The blue circle shows the day of the rare event. Take note of the action following that day. The NDX moved slightly higher right away. Then it suffered a pullback before rallying again to another all-time high. But, that rally occurred with negative divergence on the MACD indicator. In other words, as the NDX moved higher, the MACD moved lower.

Negative divergence is often an early warning sign of a potential change in trend. And, in this case, the divergence – three weeks following such a rare intraday reversal – marked the top of the NDX bull market in 2000.

Let’s fast forward to today – three weeks following only the second time ever, the NDX suffered such a rare, intraday reversal. Here’s the current chart…

The action is so similar it’s almost spooky.

Granted… we don’t want to draw too big a conclusion based on something that has only happened two times in history.

But, given all of the other giant, caution signs in the market – like the rampant speculative activity in the penny stocks, the extremely low CBOE put/call ratio, and the numerous technical divergences – traders should probably pay close attention to the similarities in this current chart of NDX and the chart from
2000.

There’s no question the index is overdue for at least a mild decline after such an amazing rally. And, if the similarities to 2000 continue, then there could be a much more significant decline headed our way.

Jeff, I am reminded of that story in the Bible where ten lepers are healed of the dreaded disease, but only one went back to say thank you. I am, in a sense, not only a “digital immigrant,” but I’m an options “leper” as well. I have read and tried to make the options definitions stick. I often describe the idea of puts akin to driving on the other side of the road in New Zealand where my wife is from. It can be done only with a lot of focused, intentional
thinking, and concentration.

That is to say that I am so grateful to you for putting together your printed materials on your Guide to Options Trading (Jeff Clark Trader members can access here). It’s without a doubt the most concise and clear presentation I have read to date, and I have read literally dozens.

They all had a part in helping me understand the basic concepts, but your wonderful presentation allowed all that studying to finally gel in a way that is actually now retrievable. I can’t recall a single illustration from before that could rest on its own merit. But yours actually found its way to my frontal lobe where it resides, so that it’s easily retrievable.

Thank you. And Thank you again.

President Trump worked tirelessly to build our economy into the envy of the world.

In the first three years of his presidency…

For the first time in history, several U.S. companies – Apple, Amazon, Microsoft, and Google – were valued at over $1 trillion each – making investors incredible fortunes…

In fact, over the first two years of his presidency, more than 1.5 million everyday Americans became millionaires… An average of 2,161 new millionaires a day… More than under any other president in history…

In the aftermath of the COVID economic crisis… what he may have in store for Americans could send shockwaves through our economy. 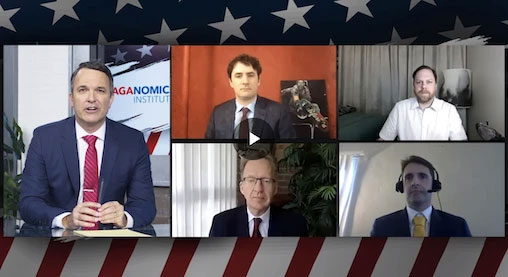