Commodities have been on a tear this year.

The price of the CRB Commodity Index has risen 30% this year alone, and some sectors are already up close to 100%.

But, not all commodity sectors have participated in this new bull market…

A couple of weeks ago, Jeff Clark talked about how we’ll soon be entering a “zero-sum” market, where there will be volatility to the upside and the downside, resulting in a flatline… or worse.

Even though commodities are far and away the “trade of the year”, they’re not immune to the highly rotational characteristic this market is beginning to show…

After all, commodities are still prone to hype headlines and flavor-of-the-day investing from retail traders.

Energy stocks, for instance, have been a fan favorite lately.

We’re now starting to see some commodities like oil and gas pulling back, likely due to some profit taking.

For example, Jeff recently mentioned to stay away from oil stocks… and I subsequently pointed out how the weather shock for natural gas markets has now run its course…

So as profits are being taken in the energy sector, the question is which commodity should investors put their money into now?

But before I tell you why I think this sector is primed for potential triple-digit gains, let me tell you why the underlying inflationary dynamic at play is here to stay…

Inflation Is Central to the Prices in Commodities

For years, commodities were a pariah among investment circles. Many investment banks and hedge funds closed their commodity trading operations as money flowed out of the sector.

Back then, many on Wall Street were simply caught flat-footed…

They thought quantitative easing (QE) – when central banks purchase securities to reduce interest rates, increase the supply of money, and drive more lending – would be good for commodities, and therefore inflation.

But simply printing money does not produce inflation. For all the cash they pumped into the system before the pandemic – none of it produced the type of price increases we’re seeing now, except of course for the stock market continuing to rip higher.

Since 2012, the commodities bear market has run deep compared to historical norms.

The sector at large lost 40% – a function of a low inflationary period – on top of rapid technological advances that opened up the shale oil industry in the U.S., and a rising dollar…

The right monetary mix to actually produce inflation is a combination of big incremental upticks in demand, lack of supply, and something called ‘velocity’ in the banking system – which represents how fast money is getting put to work.

These days, we have the combination for a perfect storm, and the demand side will only increase as the Senate gets ready to pass a $1 trillion infrastructure bill. Once it passes, inflation will only accelerate as demand for industrial commodities climbs higher.

The Demand for This Sector Is About to Take Off

Commodity chemical producers make the essential ingredients that go into products like paint, industrial coatings, and dyes used in industrial projects… which will ramp up demand once the infrastructure bill is finalized.

In addition, as supply chains begin to normalize from shortages in areas like semiconductors, the commodity chemical producers will benefit because it’ll mean more production in industries like auto and industrial manufacturing.

And, unlike other commodity producers that have benefited from the much-publicized supply chain disruptions over the past year (like the price of semiconductors), commodity chemical producers have lagged behind – and the market has punished them for it. 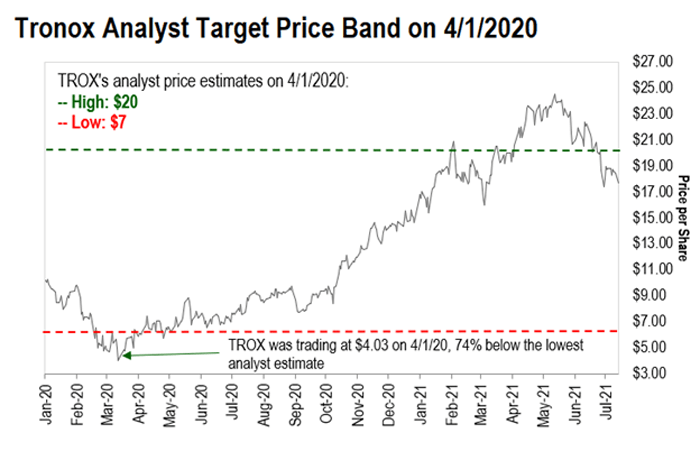 It shows the range of analyst price targets back in April 2020 for one of the main stocks in this industry – Tronox Holdings (TROX).

You can see how the market clearly oversold TROX as a result of the pandemic, and it just remained depressed, hovering around the low end of analyst price estimates… even while the rest of the market took off.

Now, take a look at where we currently are, with updated price targets… 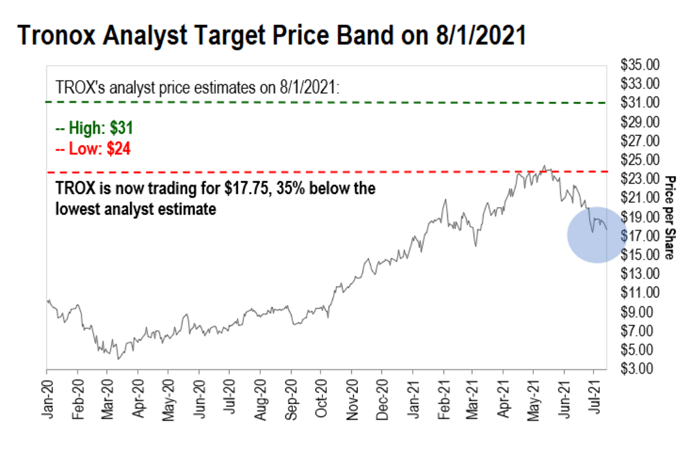 Even though analysts moved their estimates higher, TROX is still trading below the lowest estimate.

There’s another dynamic at play that’ll get the market excited, thanks to a key commodity called “titanium dioxide” or TiO2, a chemical that TROX and other companies in the industry produce.

TiO2 has been falling in price… until now.

Among commodity producers, the main question is whether they can offset rising production and raw material costs with higher prices received for their product. TiO2 stocks had some difficulty doing that, but that’s starting to change as they’re better positioned to pass through costs to their end users.

The weakness in prices starting around March 2018 has contributed to stocks in this sector underperforming. But TiO2 prices are rapidly rising, and in markets like China and the U.S., they’re at multi-year highs.

Yet, these companies are trading at head scratching levels… Industry leaders like Tronox and Kronos are 27% and 25% off their highs respectively… all trading way below even the most bearish of scenarios.

Even though we’re in the very beginning of a highly rotational, zero-sum market, opportunities in commodities going forward will continue to remain intact.

The rotational push and pull of commodities tells me to get out of energy and into sectors like chemicals, because by the time the herd senses an opportunity, it’ll be long gone.

Will you be getting in on this niche market in titanium dioxide? Or do you prefer to follow stocks that you know will make headlines?