The end of the year is a time for self-reflection… Unpack everything from the old year, box it up, and use it to get ready for the next.

Financial markets are no different.

I like to look at a single measure that tells me the real story – a black and white risk-adjusted performance summary.

It leaves out all the narratives we’ve been fed throughout the year and focuses on a factual representation of what actually is… rather than what should be.

That’s why the way this year’s performance really stacks up will surprise you and provide actionable context to build a plan for 2022.

This year we introduced the Sharpe ratio – now we’re going to use its context of past performance to see what’s coming next.

It’s a simple ratio that takes the average daily return of an asset and normalizes it by its risk (in statistical terms, it’s how far those returns deviate from the average).

Assets typically range from -4 to 4, with a higher number representing a greater return on your investment. For example, a ratio of 4 means for every one dollar you’re risking, you’re making four.

Only once two assets are normalized by their risk can they be truly compared. 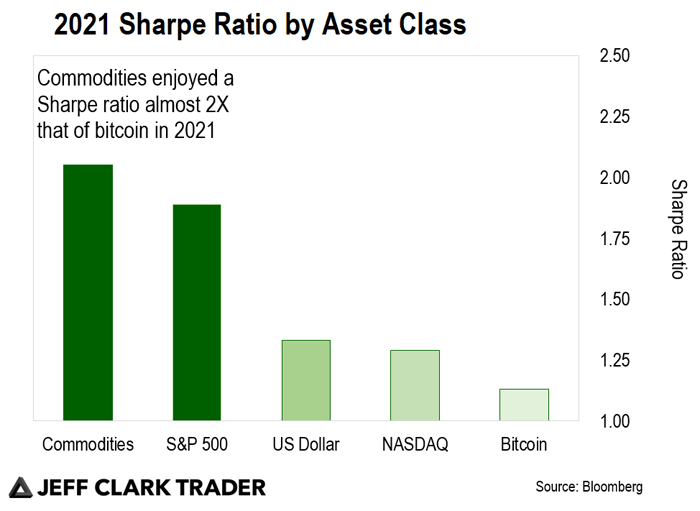 But the path toward those returns was completely different. You can say this ratio counts how grey your hair got while sitting through those 70% returns.

So, from this perspective – and I know bitcoin bulls don’t want to hear this – bitcoin was a disappointment this year.

Look, I’m a long-term bitcoin bull, and we’ve objectively recommended both buying and selling bitcoin this year. In fact, we’ve used the Sharpe ratio to recommend buying bitcoin on September 28 for about $42K.

But according to the Sharpe ratio profile, 2021 was somewhat of a bust for bitcoin even though it went up 70%. Think about all the hype, all the tweets, and the laser eyes on people’s social media. By that measure, it should have rose 700%!

You might say returns are all that matter… and that’s true. That’s why an asset that provides half the returns of bitcoin, but with far less risk, can be leveraged to not only match or even surpass bitcoin.

So if I put $1 into SPY but am able to use leverage and get $3 of exposure, then I can make three times more on the same money invested – all while knowing it’s rare for stocks to fall more than 20%. But for bitcoin, 20% drawdowns can happen within a day.

We Need to Buckle Up for Market Turbulence

Now, let’s take another look at the Sharpe ratio chart…

We can see that commodities proved to be the trade of the year (we called that back in the beginning of 2021), but not by much. A close second was the S&P 500.

That brings me to the tech heavy Nasdaq…

In the same vein that bitcoin was a hype-filled disappointment from the context of risk relative to reward, tech was too.

Every retail investor I’ve spoken with has been interested in one thing – tech.

You see, investors tend to become myopic right before a trend begins to unravel. That’s what I’m seeing now with many pockets of the tech sector.

But there needs to be a pin that pops the balloon, and it usually comes in the form of central bank policy changes.

I don’t know if the market will fall next year. What I do know for sure is that the Fed will begin to at least try to shift towards a policy of rate normalization.

That means we need to buckle up… because turbulence is on the way, especially if inflation persists.

In this scenario, tech is suffering more than other sectors because it’s become synonymous with growth… and growth stocks rise because of their promise for outsized earnings in the future (whereas value companies have earnings in the present).

As rates rise, the discounting of cash flows ensures that money today becomes worth more than money tomorrow.

So, one of the themes I’m getting ready to play is represented by the unraveling of this chart… 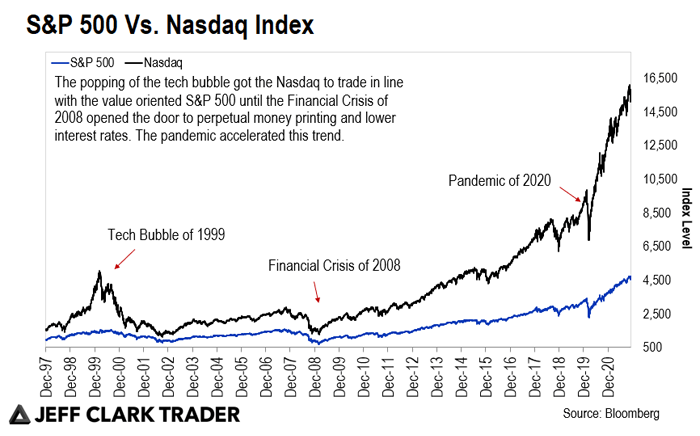 This chart shows the popping of the tech bubble in 1999, followed by these two indexes trading more or less in line until the Financial Crisis of 2008 when they compressed again.

But then, as the Fed introduced an unprecedented amount of quantitative easing in response to the crisis, they ushered in an era of declining interest rates – which has helped tech go into overdrive relative to the value-oriented S&P 500 index.

The pandemic accelerated this trend.

But with monetary policy heading towards something akin to normalization, I think we’re finally heading into a golden age of value. We’re already seeing it… underneath 2021’s performance measures.