On March 15 – a day before one of the most anticipated Fed meetings in recent history – the market found itself down 11% for the year.

All eyes were on this one…

The market was shellshocked that the stock bubble of 2021 had just popped. And combined with the financial panic from the Russian invasion, it seemed hopeless.

On paper it made sense. There was already an assumption that the Fed would lift rates.

And not just once, but at every meeting thereafter.

A regime shift like this, where a high-rate environment becomes official Fed policy, can only mean one thing…

But then something funny happened…

It was a classic case of a lot of bad news already being priced into the market. It’s something we anticipated would happen in early March, where I said:

I wouldn’t be shocked by a big relief rally on the horizon. It’s just the way of the news cycle… A small 25-basis point rate hike on March 16 – coupled with the type of dovish “Fed-speak” we have grown accustomed to – may set off a rally to retest the 4450 area sooner rather than later.

But that relief rally was short lived. We’re now down 13% on the year, with another big Fed meeting coming up tomorrow.

Already, I see the pieces are in place for another rally.

As Jeff Clark explained yesterday, things are extremely stretched to the downside. The CBOE put/call ratio and the Volatility Index (VIX) are off the charts, and both have mean reverting properties so they won’t stay this high forever.

But this current bear market is all about tech.

To help time this erratic market, I pay close attention to the spread between the Invesco QQQ Trust Series 1 (QQQ) and the SPDR S&P 500 ETF Trust (SPY).

You see, QQQ outweighs tech stocks relative to the S&P 500. So, if the market is still adjusting to a higher-rate environment, then QQQ will underperform SPY.

That’s why on April 12, I stated that there’s still a lot more downside left.

It’s because the QQQ/SPY spread had already faded the entire relief rally I referenced earlier, but stock prices themselves haven’t.

This meant one thing… we would revisit the lows of March. And we did that with the QQQ trading even lower.

But now, we have the opposite situation. 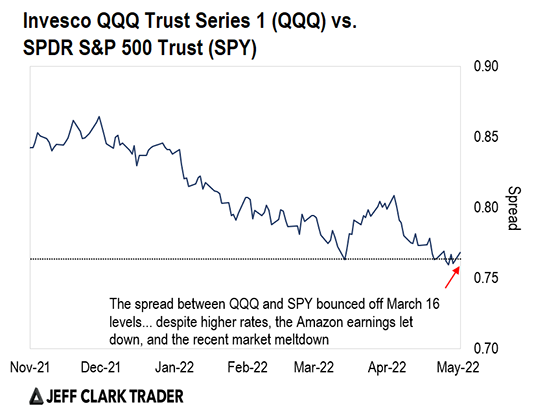 Despite a disastrous earnings report from Amazon (AMZN), QQQ is no longer freefalling relative to the SPY.

In fact, it has been outperforming the value-oriented S&P 500, while stock prices across the board continue to fall.

At this point, it’s no secret that higher rates and inflation are driving asset prices down. But with this spread holding steady, it’s telling me the bear case for the market could be getting played out.

So, I wouldn’t be surprised to see us trading at higher levels than where we are today.

Valuations are at their long-term average. For now, this takes the longstanding bear mantra that stocks are expensive off the table.

Judging from today’s 2% rally from the 4050 level on the S&P 500 – after it seemed like there was no bottom in sight – another relief rally may be taking shape.

Now would be a good time to start buying high quality stocks… those displaying profitability and growth in a challenging market.

P.S. With inflation on the rise, many folks are worried about their retirement funds. That’s why next week, Jeff Clark will reveal the most reliable strategy of his career that can help generate steady gains. It’s so reliable that Wall Street legend, John Bogle, called it “a law of gravity” in the stock market.

It’s all thanks to a 44-day window where Jeff can know ahead of time which stocks are pre-determined to see big moves. He’s even built a proprietary calendar that tells you which stocks to target. So far, Jeff has seen a 95%-win rate…

You won’t want to miss Jeff’s presentation on Wednesday, May 11 at 8 p.m. ET… There, he’ll share all you need to know about this new strategy that can help you protect your retirement. Click here to reserve your spot.

Where do you think tech stocks will head next?