After trending lower for the past several months, Treasury bonds look ready to rally.

We’ve been bearish on T-bonds for most of the past year.

We warned the bond bubble looked ready to pop last March. Then, we cautioned that T-bonds looked ripe for a sharp decline last October. And finally, we argued for a continued breakdown in the Treasury bond market in early November…

Now though, conditions are oversold enough that we could see a quick rally in U.S. Government bonds. 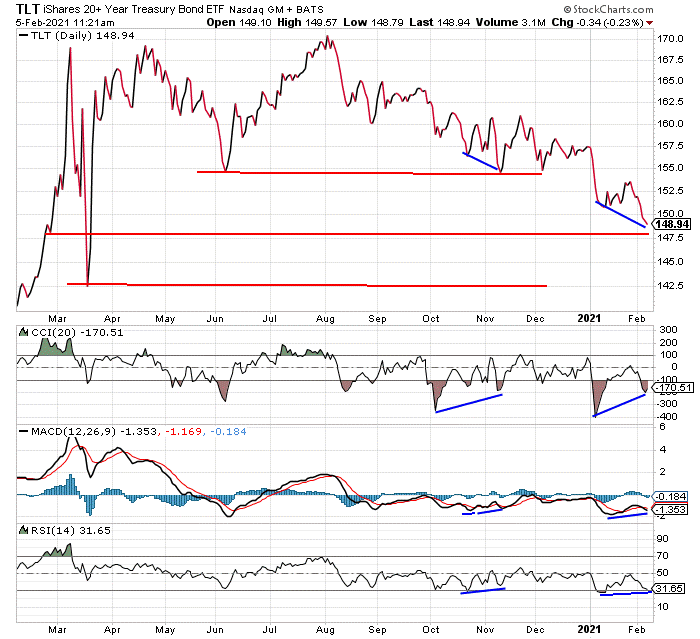 TLT has been in a steady downtrend – making lower lows and lower highs – since August. It’s approaching support near $148 per share. And, the chart has formed “positive divergence” on the recent decline.

In other words, as TLT has dropped to a lower low, the various technical indicators have made higher lows. This sort of positive divergence is often an early warning sign of a reversal higher.

TLT had a similar setup in early November, just before a quick, two-week rally in Treasury bonds. A similar move this time could pop TLT back up to $155, or so, by the end of the month.

It’s worth noting that this potentially bullish setup in Treasury bonds is happening while bearish setups are forming in other “risky” assets.

Investors and traders have been piling into speculative assets, without much concern for the risk of those assets. That’s usually what happens in a momentum-fueled rally – folks get rid of their conservative investments and throw money at “risk-on” trades.

But – for reasons we’ve pointed to over the past couple of weeks – it looks like the hot money is approaching a cooling-off period. And, as money comes out of those risky assets, it’s going to flow into “risk-off” assets like Treasury bonds.

Based on the look of the TLT chart above, that risk-off rally could get started soon.

P.S. Following the highs and lows of the bond market may not be everyone’s preferred way of quickly making money, but I’ve found a single stock that could help generate gains month after month.

Most people wouldn’t even look twice at this tiny stock, but it’s one of my best-kept secrets. You see, using just this “boring” stock, I’ve seen gains of 161% overnight… And, I believe it has the potential to do even better for you.

So, click here to learn more about using my secret strategy and this little-known ticker.

Have you made significant gains by being bearish on Treasury bonds these past few months?